First Soccer Games of the Season

So, last-Last Saturday Kaleb and Emily (for the first time EVER) had their first Soccer games of the season. It was both hilarious an heartbreaking. OK, so heartbreaking is a bit dramatic, tiny bit sad would be more appropriate. :)

Kaleb was first. He really had a good time playing in a REAL game. He's just a tiny bit competitive. The fact that his team won 5-0 was mildly thrilling for him. *seriously, if you don't know me-you really must read most of my posts (of this nature) with as much dripping sarcasm as possible* OK-so, the fun and surprising part was two of his friends played for the opposing team! LOL Harrison and Weston attend the same church class Kaleb does. At one point during the game Kaleb tried talking to Harrison while everyone repositioned for a throw in, Harrison just looked at him and kept walking. It was pretty hilarious. I imagine from the look on Harrison's face the thought "you've gotta be kidding me right? No fraternizing with the Enemy...any of that ring a bell?!" LOL probably not though since he's just about the sweetest kid. 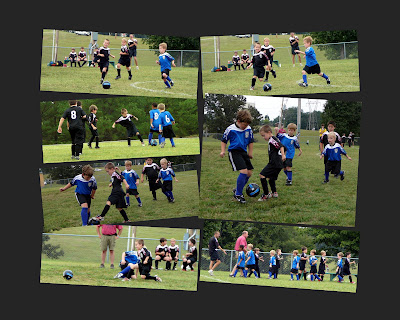 This year the league knocked his age group back in game rules. There were no goalies this year and they had to go back to the "kiddie goals". None of the boys, and coaches for that matter, are very thrilled about this. You can not imagine how many balls barely missed the goal. Every parent was thinking "if they were playing with a REAL goal net that would have been a goal!" The star player on Kaleb's team would have scored liked 9 more points if it weren't for the kiddie goal. Silver lining; they will be forced to work on accuracy and kick some serious soccer-ahem, come next year! *wink* 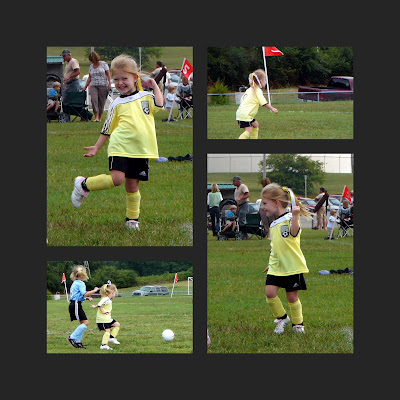 Emily's very FIRST EVER debut soccer game was next. You have never seen a four year old girl as excited as she was. She was literally jumping all over the field waiting for the game to start! Her coach was laughing at her enthusiasm. During the game Emily was squashed and taken to the ground. By her own teammate. True. Right after Sarah, Emily was first in line to draw from the drama gene pool and therefore hammed up her injuries. It was hard not to laugh. Or take steady pictures. The assistant coach kept looking at me funny. I think she thought it was really strange that I didn't jump up and run onto the field to save my baby! Actually, I'm a bit shocked myself. Usually I'm all about protection. Ask anyone. LOL 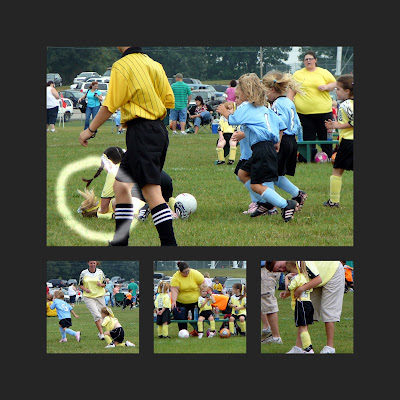 After the game the coach and assistant coach commented that they could tell she had played on a team before. Jokes on them cause she never has! Ha Ha. She really was great out there and showed no fear, but come on-she's been watching soccer since just about BIRTH when her siblings started playing! PLUS she plays at home in the yard. The soccer goal that Crappa and Uncle Jeremy built for practice has been put to some good use. :) Unfortunately all the energy in the world, or fake experience, was unable to land them a win. They lost. 2-10. Tragic. In their defense (yes I must-I'm her mom) the other team was older, by at LEAST 6 months! LOL 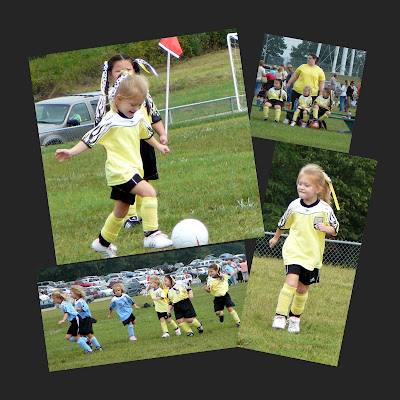 Everyone had a great time. We spent pretty much ALL morning at the soccer fields. We came home for a VERY short lunch in between games. Sadly none of the family members living close were able to make it to either game. Grandma and Preslee put together a special lunch in honor of Emily's first game ever! It was all about the color ORANGE-since it's Em's favorite color. It was very sweet of them. Those NOT playing in soccer games found other lost and ignored children to have fun with. ;) They had a ball playing tag, various hand games and London Bridges. Christopher was pretty much the only boy in a sea of lonely-and bored little girls. Hmmm...foreshadowing of the future?..... I'd rather not think about that THANK YOU! LOL 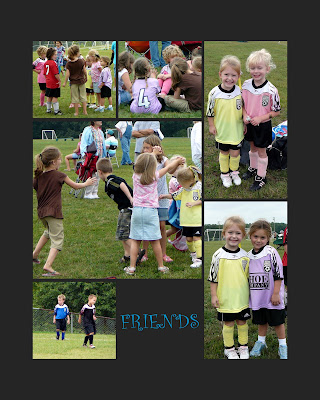 Crafting is my Therapy said...

AWESOME SOCKER PICTS! Hanna you have defiantly got some blogging skilz. I'm glad you guys are doing well.

great shots your pics turned out so cute. the kids are adorable. lov'in that shutterfly software! awesome!!

Thanks!! I am maybe going a little crazy with the shutterfly software but I LOVE making these collages. :) I'm tempeted to get one printed just so I can see how it looks. LOL

So much fun! Soccer IS the best sport ever after all. I love it!

Love the post! I can't believe Emily is big enough for soccer!! They are growing up so fast!