Before you get all excited and think that I some how hit the jackpot and found the man of my dreams who is also a DR that took me to Hawaii OR landed a singing contract that has left me ridiculously wealthy and thus I took myself to Hawaii, the answer is. uh. no. To be perfectly honest, I wouldn't mind either one though. LOL!

Last Saturday (8-30-08) the kids had a primary activity day that took them to "Hawaii". I have to tell you a little side story about this. :) it's really cute, hee hee. OK, so the kids have been asking my parents and I to take them to Hawaii for the longest time now! A short time after we moved in with my parents Aunt Janece got the kids a "piggy bank" that is in the shape of a guitar with Elvis in Hawaii pictured on the front! 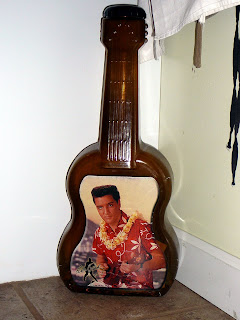 They LOVE putting money into this thing. Well, at first we were all putting coins in to save for a family reunion camping trip to OH that we took last summer. We saved enough for the kids to buy flashlights that we also used for 72 hour kits. *wink* When we got home the kids asked what trip we were going to save our coins for now? Kaleb quickly decided for us. "I know!" he said, "We should save our money and go to Hawaii! Wouldn't that be fun?! You've always said you wanted to go and we want to go too!" Well, how do you say no to that? You don't.

So, we've been putting coins into Elvis' guitar now for over a year. Guess what? We still don't have enough money to go to Hawaii. Shocked?! LOL, well the kids are! So when the Primary president told the kids they would be having a Hawaiian party in just a few weeks my kids were VERY excited! Christopher even asked me if this meant we finally had enough money to go to Hawaii from the guitar bank. It was not easy to keep a straight face as I explained. He's so cute, and so understanding! Kids innocence and ignorance can be so darn cute! 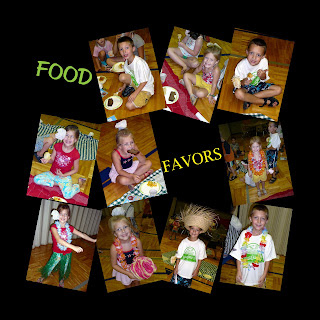 I've digressed. Oh me. It's just so easy to do when I'm telling stories about my kids. Back to the activity! Well, they asked me if I would be willing to do one of the stops on the tour around Hawaii. I said yes. Yes, I'm crazy. I was in charge of games! WAHOO! So, we had around the Hawaiian Islands (played just like around the world basket ball) and we had musical beach towels (I don't need to explain that one do I?) and we had Limbo-which we never played and my MOST favorite game of all.....Tacky Tourist Relay! 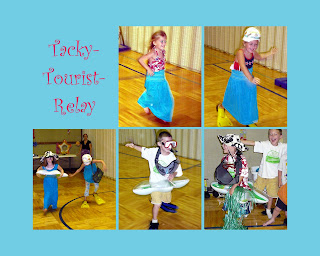 This was SOOOO much fun! The kids were split into two teams. One player from each team ran down to a table filled with "tourist" items; beach hat, goggles, sunglasses, Hawaiian shirt or sun dress, fanny pack or purse, a pool floaty and flippers! The players took one item, put it on and then raced back to their team. They then had to take off the item or items and pass them to the team mate next in line. Who had to put all of the items on, correctly, and race down to add another item and so forth. The first team across the line with ALL the items on won! This was an ABSOLUTE HOOT to watch! My camera does not take really great pictures in the Churches gymnasium lights, so they're not the greatest-but you get the idea. :) 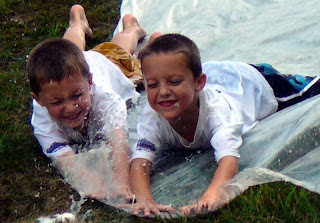 During the activity they also ate Hawaiian food and made paper flowers. But the BIG event was the the homemade SLIP-N-SLIDE! At a certain point the Bishop poured dish soap all over the plastic to make the slipping part go better. It worked. The boys thought it was much more fun to go down the slide together. They only went down individually once-I think. So sadly I don't have any pics of just Kaleb by himself. But the ones I have of them together are just priceless! I love the look of pure joy on their faces sliding down and crashing into the bottom together! 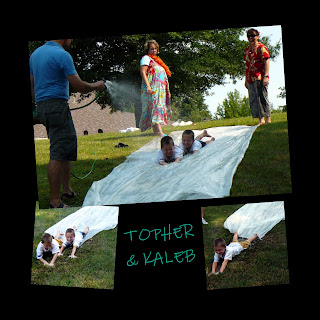 Kayleah was graceful nearly every time she went down. She is a natural athlete so she figured out how to work the slide for the best ride quickly. Her only big flops were when other people came down too soon and landed on her! LOL 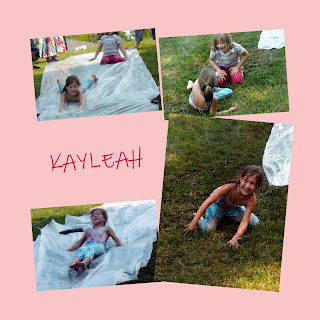 Sarah was. well. Sarah. I just love, love, love this hilarious little girl! Her giggle always makes me laugh-even if I don't want to. The song I sang to Sarah when she was a baby that was her song was You Are My Sunshine. Well, she really IS my sunshine! 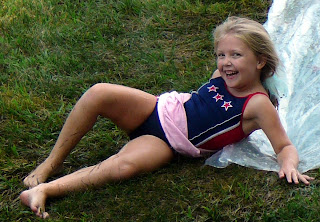 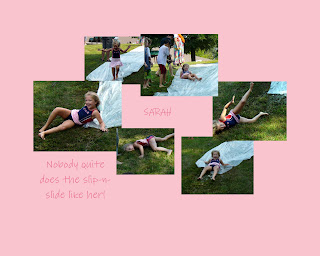 Emily mostly ran down the slide. She got a couple of good slides in, but after one of them she got up and ran down more of the hill and fell into a hidden drain pipe. She banged up her shin pretty good and gave herself a pretty impressive bruise that is STILL faintly there. It didn't stop her from going down again, though afterward she was very cautious on her slides and quickly stopped herself at the end. :) 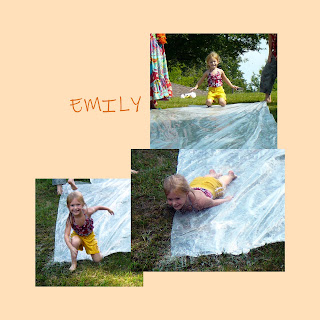 Last Sunday my sister Janece was re-admitted to the hospital for an intra uterine infection. These things are scary! Mom and I got on the Internet to look them up and after reading about them felt very blessed that Janece got to the hospital as early on with the infection as she did. To say the least this last week has been an emotional roller coaster; but one that ended with smiles. 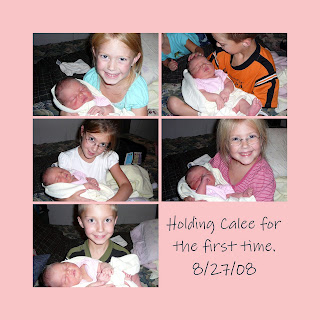 After Sacrament meeting in church last Sunday, Jeremy called Janece to check on her and Calee. She was in tears from the pain along with some other symptoms that worried Jeremy. He and my Dad went immediately home to give her a blessing and get her to the hospital. I met them at the emergency room entrance with a wheelchair for her. I teared up as I watched my Dad and my brother-in-law help her from the car to the wheelchair. Janece will say that she has a low threshold for pain, even still I rarely see her cry. So you can imagine how difficult it was to see her catching her breath from the pain while tears streaked her cheeks.

Dad and I stayed in a small waiting area with Calee until the triage nurse assessed Janece. After she had been initially examined by an ER doctor they had me take Calee home to wait for them there instead of the hospital. Up to this point Janece had been nursing Calee. When I got home she was hungry, as instructed by Janece and Jeremy, I gave her her first bottle. She was LESS than impressed. :) Still I struggled not to cry, as I held this sweet girl, with feelings of guilt. Guilt, because I would have wanted to be the one to give my baby their first bottle.

Memories of leaving the Triplets behind in the hospital just a week after their delivery flooded my mind. I felt so empty without my babies and cried everyday, mostly at night, longing to hold and take care of them myself. Now my sister was temporarily separated from her baby and my heart ached for her. Janece and Calee's situation tugged greatly at those heartstrings from what feels like so long ago. This may be the reason why, or it could just be my insane love of babies, that I have grown so fond of this sweet little girl. 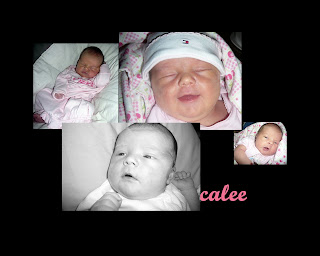 I felt relieved that even though it is difficult to be separated from your new born, at least Janece didn't have to feel anxious over leaving her precious child with strangers. Calee was well cared for and loved by her Grandma and Grandpa, Aunts, cousins and of course Big sister Preslee and her Dad. You can tell she's the baby in the family now!

Most of you know that if there's a new baby around I just can't resist cuddling up and gushing over it! Well, this was no different. The more time I got to spend helping with Calee the more pictures I took of her! So get ready! You may start to think that I have more photos of her than my own kids at this current point in time. Individually...maybe. Collectively, not a chance! LOL

We just can't get over all the dark hair she has!! It's so pretty and has that baby softness you can't resist touching. As cute as her hair, head, eyes, nose, mouth, cheeks-ok you get the point ;) as cute as Calee is, the girl has got Crappa's feet. We feel for her now, and we will feel for her as she gets older and wants to wear cute toe less shoes or sandals. Even this picture doesn't do the second toe justice. I'll try to get a better one soon. LOL 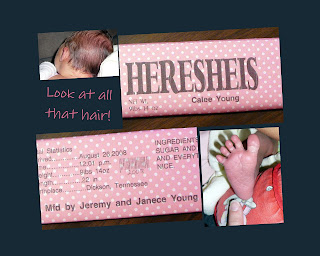 To finish up Janece's story, she was admitted back to Labor and Delivery on Sunday afternoon and was released on Tuesday, Calee's one week birthday, to come home. They stayed at our house until Saturday night. It was hard to see them go. It's been so fun having them here! Preslee has had a ball with all the instant playmates around and of course it's been fun to peak and kiss that sweet baby almost any hour of the day! We are all so happy Janece is healthy and home with her family.
Spat Out by Hannah at 7:29 AM 7 comments: