Flashback Friday #9
Hair
I'm BACK!! I promise that I have not forgotten about flashback Friday's-I have just been rediculously busy. I have had this flashback picked out back when I missed the first flashback Friday. It was a Tuesday and I spent just about all day cutting hair.
First I cut my brother-in-laws hair. It turned out pretty good. He had let it grow too long for Janece's taste. She was all set to cut it but asked if I would be willing instead. I love to cut hair so I said yes. About two seconds after I started I got VERY nervous. Jeremy is a bit of a perfectionist. I can sympathize with him....when it comes to certain things I'm a bit of a perfectionist as well. So anyway, I was nervous. I actually had to take a quick break during the hair cut to pick Emily up from Preschool. When it was all said and done it had taken me about 2 and a half hours to cut his hair. I think it turned out pretty good though. AND Janece liked it! :)
The day of hair cutting ended with me cutting Sarah's hair. She has such beautiful hair! It's thick and fine which makes it perfect to wash and go BUT a pain in the but to keep a ponytail around or cut! So after almost two hours of cutting her hair I gave up. It's decent but it deffinitly needs to be "fixed" by a professional.
So all the talk about hair cuts and styles got me thinking about all the different styles that I have sported throughout the times and I decided to share with you! So get ready for some good laughs!
OK in this first collage we have the younger years. On the bottom right this is me-when I FINALLY had hair. LOL I was pretty much bald until I was two. Please note-I was blonde. That's right people-I'm a natural blonde! *wink wink and a nod* Next to that we have a school picture. Obviously the blonde didn't last. ;) Then we have an Easter picture. Before you think that the hair style I had must have fallen out prior to the picture-it didn't. That's actually how I wore it. Remember when it was popoular to have "wings" on either side of your head and then split curl your bangs, half up and half down? Yep. This is my version. If you keep going with that memory, after a while it became stylish to just spray out ONE side of your head. Gotta love the late 80's early 90's! Above that is the most scary hair style of all! For WHATEVER reason I had had my hair cut really short and decided to put it in a ponytail on the top of my head-all the hair that would go in the ponytail, and then curled my bangs. So. Sad. And last the picture of me and my sisters sportting the Ferra Fossett hair style! TEE HEE 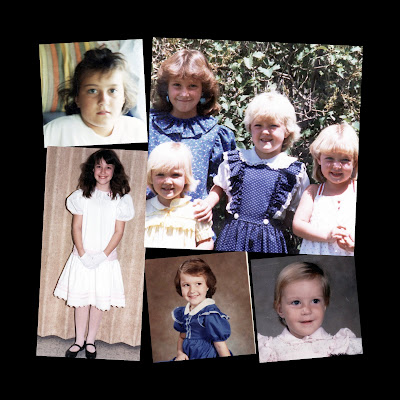 I like to think of this second collage as "the good, the bad and the WHAT?!" LOL So, starting at the top left this time this would be "the good". It's a picture of me and my cousin Cori with our hair long and tucked away with a headband. Even though I have a big forehead (my mother reminds me of this when I pull my hair back-she's not a fan) I think it looks pretty good. Under that we have the first of "the bad". Oh yes, that's a mullet. I look at pictures during this year of my life and just have to ask WHY?! *shudder* Moving right along-the mullet just got worse! How you ask can there be anything worse than a mullet? Well, I'll tell you what's worse-when you PERM the back! Do your eyes a favor and don't linger long on that one. Next to that is my pigtail phase. That style wasn't so bad. Above that is "the WHAT?!" Yeah. It's the mullet, with a perm and much longer. I don't know how I had ANY friends?! 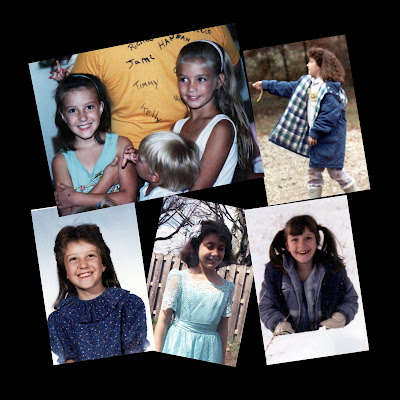 Finally this third collage is the most embarrassing. Why is this one the most embarrasing? Because I styled my own hair in these! Middle school and High school are hard enough without looking like a total dork. It's no wonder my self esteem was low! LOL OK- no, I don't wear glasses nor do I need them. We went to a wack eye Dr. one year who put just about all of us in glasses. He promised the headachs would go away but they never did. Next year we went to a new DR. and VIOLA I had perfect eyes. mhm.... So the next two pictures just really are embarrassing styles as well. I think the bottom one is my Junior year in HS?..but I'm not sure. 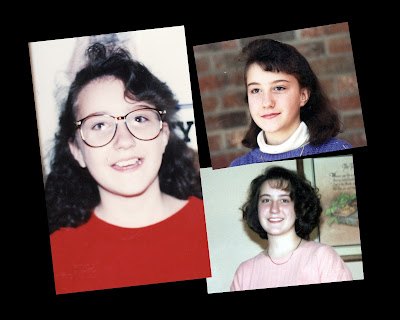 Well I hope you've enjoyed laughing at my hair as much as I have. :) I thought about doing a collage of my after HS hair styles but they are much better and so, where's the fun in that?!
Spat Out by Hannah at 10:35 AM 9 comments: