I've got two weeks worth of soccer games to share with you. So I'll start with 9/13/08. This was a CRAZY day to say the least. First we had to be up and at the elementary school by 7:00 AM for Kaleb's soccer pictures. Then he had his first game of the day at 8:00 AM. Yes I said FIRST game. For some reason this week his team played twice? Kaleb scored a goal in this game and could not have been more pleased when he did! LOL After his game we sprinted home for a half hour. I ate breakfast and put "real" clothes on. Then we were off again!
Back to the elementary school this time for Emily's soccer pictures. Then we ran over the fields, they are next to the school, for Kaleb's second game of the day. I only got to watch the first 1/2 hour of his second game because Emily's game over lapped with his. So at 11:30 she and I headed down the fields to her game. THEY WON THIS ONE! The score was 3-2 and the Honeybees WON! Emily didn't make any goals but she assisted on two of the three. She really has a natural knack for soccer. 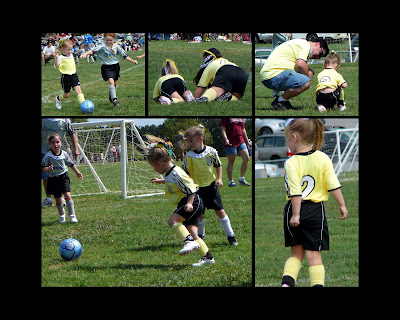 Kaleb's team won both of their games this day keeping them undefeated so far this season. I'm a little curious as to how Kaleb will handle it if his team looses. So far his soccer career here as been amazing. His team has won every single game that they've played since he joined this league in fall 2007. I'm so proud of how well he's doing in soccer and love that I can see his skills improving. With each practice and game I can tell how much Kaleb enjoys playing and love to see the look of satisfaction on his face when he does well. 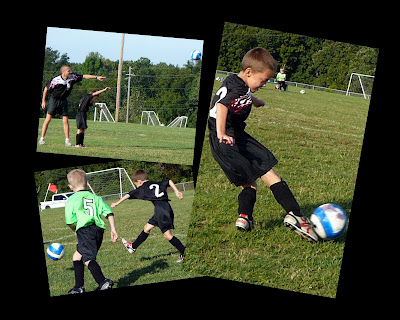 Moving on to this last weekend's games, 9/20/08. Well Emily was first to play this week and I was so grateful that we got to sleep in! No more 7 am suicide Saturday mornings for me...WAHOO! As most of you know, I am NOT a morning person. Not. Even. Close. Well, this weeks game was very similar to the first Honeybee game. They were slaughtered. LOL They had a blast playing though and you can bet that Emily had a few face plants for this game much like the first one. Poor thing! hee hee, I know- I'm evil! LOL 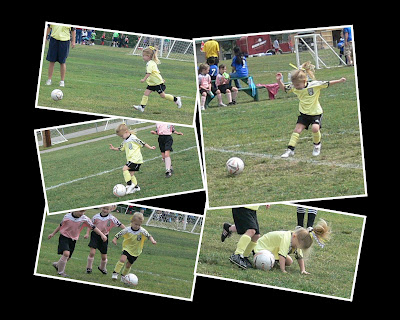 Kaleb's team just may have found their match in the league this year. I may be just a tad bit biased here but this was one of the most exciting soccer games I've seen. It was a bit nerve racking. For the most part Kaleb's team plays offensive games. They out score the other team by a comfortable margin. This game was very different. This game was all about defense. I think for the first time this season they did not make the first goal. It rattled the Black Dragons a bit at first but they have been well coached and play just as well defensively as they do offensively. At the beginning of the 4th quarter the score was 3-2 Black Dragons (Kaleb scored the third goal-yeah!). These little guys were wore out. I don't think they've been run up and down the field so hard before. Emotions were high and the boys started getting very frustrated as time after time their goal attempts barely missed the mark. It's not been easy for the boys to adjust down to the smaller goal. We are ALL looking forward to the fall '09 season when the boys go back to the way they played last year. 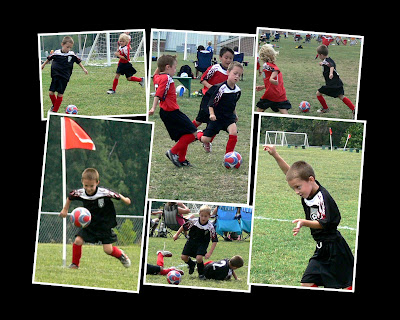 Anwho-the Black Dragons stayed strong and nailed a fourth goal as the the game was wrapping up. You can bet they did not take this win for granted. I think the Black Dragons have come to expect to win every game they play. This is a great way to go into a game mentally. However, you have to make sure you're not letting up on your game and that you respect the other players/opposing team's abilities on the field with you. I'm sure this Saturday their expectations were no different. Play hard, have fun and win. I do think though that this game's win tasted a little bit sweeter. Maybe it's wins like these that coined the phrase "Sweet Victory".
Spat Out by Hannah at 9:07 AM 6 comments: