It all started because Aunt Janece thought it would be fun to play with trash. Recyclables. She's fun like that. So tonight I sat down at the table with five kiddos ready to play with milk jugs, juice bottles, and empty cartons of all kinds. Not too long after starting this "fun activity" I was trying to remember WHY I thought that it would be fun. Today was a rough day. I just wasn't in the crafting mood. But you can't exactly back out on the 1st EVER Sink or Float Rally AFTER you've told 5, really 6 'cause Preslee participated of course, that you've changed your mind-maybe tomorrow. 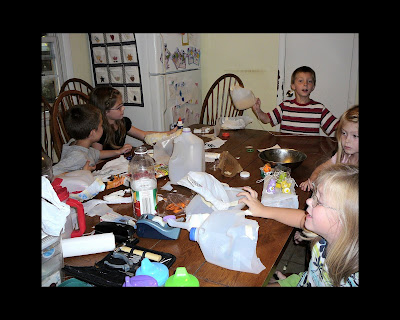 So I did my best to help 5 kiddos create the best boats ever that would wouldn't sink. Oh ya, and I managed to throw one together for myself too. Somehow. I honestly thought that by the time the boat making was done that one or more of my children would require a trip to the ER for stitches! They wasted no time grabbing any sharp object they thought would tear open the plastic containers placed before them. Seriously-I had to stop Kayleah from stabbing a pencil repeatedly into the neck of an apple juice container! Frightening.
I thought this project might take 45 mins to 1/2 an hour. Boy was I wrong! We started at 4 pm and ended just after 6pm. We actually worked through dinner. It was funny and crazy all at the same time! When Aunt Janece and Preslee arrived we headed out to the swimming pool to test our creations. Only surprise for us-the mosquito's tested us! There is not enough baking soda and water paste or calomine lotion in this city to ease the scratching and itching!!
Back to the Rally. OK, we put the boats in youngest to oldest. Emily was first with her Care Bear rescue raft. Trailing behind the raft was half a sprite can carrying an orange My Little Pony. The current was too strong and the pony fell out of the sprite life saving device. Lucky for her she was made out of plastic and floated along behind just fine! LOL 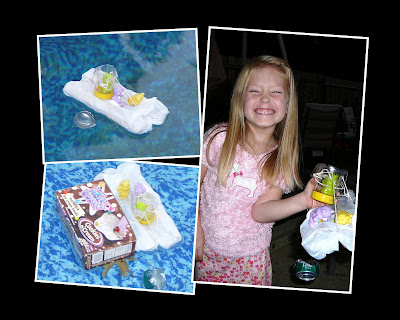 Preslee put all three of her boats in next. One was a round boat, another a treasure chest boat and the third a big boat. I'm not sure what it was named/called. All three of her boats floated along nicely. She was so excited about this rally. Preslee helped her mom make cookies and ribbons for all the participants! :) 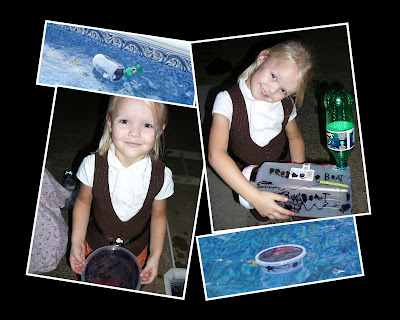 Next Sarah put her creation into the water. I have to side track here-sorry but it is totally necessary for you to truly appreciate her boat. Trust me! :) OK, last week my cousin Verle came out from Colorado to help my dad work on the addition we're putting onto the house *YAY!!* They made huge progress while he was here. One of the first noticeable things they did was get the roof framed. Last week when the kids got off the bus one day they saw the new peak of the roof. Sarah was very excited about it and said it looked like they were building a castle on top of the house. Kaleb being the nice indulging big brother that he is played along with this and Said "yep it's a castle." Well Sarah then asked him "who's" castle it was. Thinking fast he answered it was Princess Jasmines castle. Sarah LOVED this answer and was very excited.
Now, I'm going to tell you what happened from my point of view shortly after they got in the house. *didn't know the story of the castle talk on the way home* Well, after they all got in the house and told me about their days (all at once mind you so I was still trying to sort out who actually did what, said what etc) I went to my room to finish laundry folding. Janece was over and was sitting on the couch nursing Calee with a clear shot view into the boys room/play room. Kayleah comes into the room with Sarah on her heels both are very frustrated. Kayleah asked me if Crappa and "the boys" are building the new house. At first I was confused but then she asked again and I said "ya, the stuff they're building is the new part of the house" then she puts her hand above her head making a roof shape and asked "even this part?" I said "yes-that's the roof." Kayleah turned around to face Sarah, who had a very angry face on, and said "see I told you!" 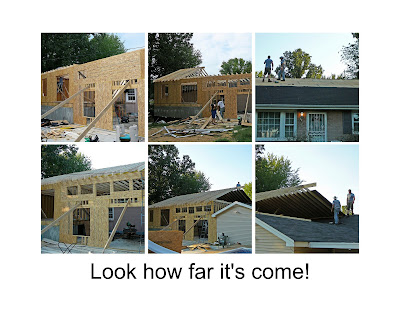 Sarah immediately turned around and stomped-really stomped out of our room and into the boys room growling Kaleb's name. Know Sarah and "that look/stomp" I followed her to see what was going on. Janece has perfect view of what's about to unfold as do I and so we watch. We see Sarah march up to Kaleb who is just inside the doorway *he was sitting on the floor but as soon as she growled his name he jumped to his feet* she grabbed him from behind and while literally lifting him off the ground and throwing him back in the room says "IT'S NOT A CASTLE?!"
Janece and I are dazed and confused and also trying our best not to bust out laughing at what just happened! I quickly instructed Sarah and Kaleb to follow me to the family room. I asked what was going on and Sarah said that Kaleb had lied to her. Kaleb told me/us what happened on the way home from the bus and then Janece and I REALLY had trouble holding in the giggles. Sarah stood fuming mad during all of this demanding an apology from him for lying to her and ruining her life!
In case you're wondering-I'm not exaggerating. Sarah is a drama queen through and through! We love her for it-most of the time! LOL In an effort not to minimize Sarah's obvious hurt feelings I explained to Kaleb that it wasn't nice to tease her about something he knows would make her upset. He started to insist that he wasn't teasing her. So I asked him if he really thought they might be building a castle for Jasmine on top of our house. While keeping his face poker straight he said "well, it might be...I didn't know." I gave him the classic "give me a brake" mom look and then doing his best NOT to smile he said "No, I didn't think it was a castle. I thought it was the roof."
He apologized to Sarah for teasing her and then I sent him off to keep playing. Sarah still wanted blood for the trickery. I did my best to explain teasing and joking to her-again. But she wasn't very satisfied with my lecture. LOL After I sent her back to play Janece and I fell apart laughing! Janece commented that Sarah looked like she was going to tear him in half-and she could have! Oh my sweet Sarah-she makes sure there is never a dull moment. Not one! 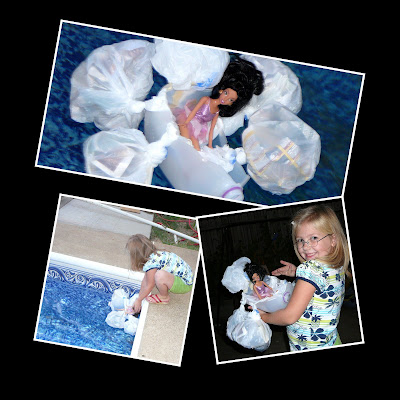 SO, for her boat she wanted to make a Jasmine boat. Since she couldn't have a castle for her, she might as well have a boat. I thought it turned out really cute! *yes I helped her with design and construction* It's suppose to be Princess Jasmine floating through the clouds, only instead of on a magic carpet she's in a magic boat. LOL *She is my sunshine!*
Kayleah went next. Her boat started out as the "Brother of Jared" boat. Ya know, the one that could be top or bottom side up? Well it worked that way-kuddos to her. She stuffed a small crab bean bag inside to make sure no water leaked in. She built a sturdy boat! Once it was on the water Aunt Janece said it looked like a space ship-she was right! Kayleah loved it and went with that theme. :) 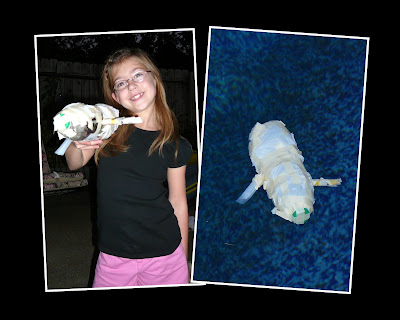 Christopher was next. He made a Bunny Boat with a newspaper anchor. He was so funny making his boat. He kept taking his boat into his room and dropping it from the top of his bunk bed to see if the bunny was able to hold on and not fall out. I really don't know how this had anything to do with floating and after trying to have him explain it to me I gave up and just said "great!" when he reported success! LOL He is such a little engineer in the making! 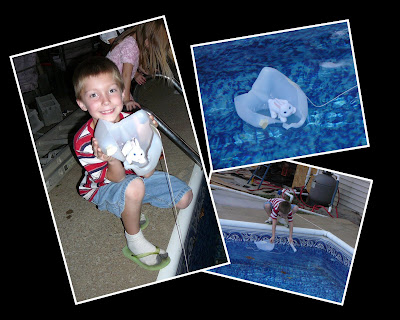 Kaleb's boat was too fun! I have to admit I suggested he add the floating devices to the side. Mostly because he was so worried about it staying afloat. No amount of assurances from me was calming him. So we added the extra help and in the end the boat looked like the very creature he wanted it to carry! A CRAB! He thought this was very cool and of course-it's what he was trying to do *wink wink and a nod* LOL 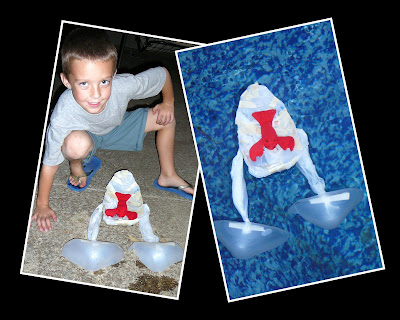 Not to be outdone Aunt Janece and I also made boats. In the end every one's boat Floated! YAY! We took pictures and then hurried inside because we were being eaten alive! Inside we celebrated with Preslee's cookies and pinned ribbons on all the kids. They had a great time. Now, instead of cleaning up the disaster that is my kitchen, both from the boat making and dinner, I'm blogging about the event! Can you tell where my priorities are?! LOL 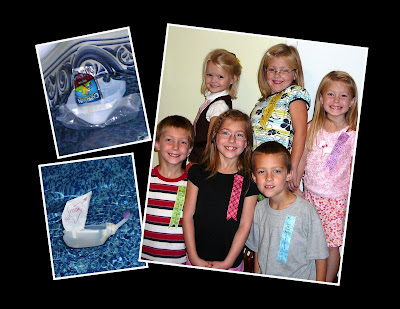