Allergies are just about our worst enemy. Every year when the weather changes we get hit with a number of irritating illnesses. Among them are sinus pressure headaches and sometimes sinus infections. Emily is currently suffering from these.
Friday night she spiked a fever. So I'm holding my breath that it doesn't turn into an infection. So far, so good. Since she spiked a fever that warranted Motrin I did not let her play in her soccer game Saturday morning. This was totally fine with her-more proof that she shouldn't play. Her coach can't even get her to agree to a small water break! She tells her "I'm fine, I just want to play!" whenever she tries. LOL
Saturday afternoon Emily was resting on the couch feeling hot, but not so great *ba-dum cha!", and lonely. My mom had made some soup for her and Kaleb *he was over heated from his soccer game...that story is coming with his game update* but she wasn't interested in eating much. I was busy getting lunch for the other kids and thinking of my sick babes in the family room all at the same time. I kept peaking in on them every few minutes. Just before I was gearing up for another "peaking-in" I heard Christopher talking.
I listened to him for a second and realized that he was reading, out loud. I looked in the family room and saw my sweet Topher reading a book to Emily. My eyes started to tear up instantly. I felt so much gratitude and love for my tender son. Here I had been wishing I could give a little extra TLC to both Emily and Kaleb but unable at the moment. I needed to take care of all of my children, and then here was Christopher helping take care of his sister. Maybe it was because he understands the misery of sinus congestion? But I doubt he was even thinking about that. My bet is that he simply wanted to help his siter. I'm sure he would have read to Kaleb as well but at this time he had fallen asleep, or so it appeared. :) 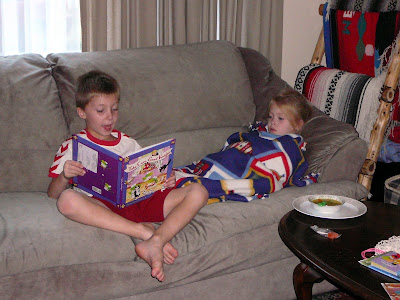 That's my Topher. Biggest sweetest most sincere heart around. He never did come say a word to me about his good deed. He didn't even notice when I snapped this picture. He didn't do it to get a word of praise from mom. He did it because he saw a need he could help with. I really can't find the words to tell you how special my Christopher is. A while later, when I could do it without crying, I found him and gave him a hug. I thanked him for being so sweet and reading to Emily. I made sure he knew how much it meant to me that he helped out especially when no one had asked him too.
To say that giving a child praise makes them happy is an understatement. I love the look on Christopher's face-especially his eyes when he receives unexpected praise. I love this little man of mine. There's something about him. :) Everyone who has the opportunity to get to know Christopher, loves him. Truly, loves him!
Spat Out by Hannah at 8:38 PM 7 comments: