My baby turned 5. sniff sniff. She had a spectacular birthday! Her day started off with going to Dickson Doughnuts with her cousin Preslee and her friend Isaac. They had SO much fun picking out their doughnuts and eating them in the car. It's always fun taking in birthday treats to school. Emily wanted to take cupcake ice cream cones in. They were so cute! And WAY easier to make than I thought. She got lots of awesome gifts. If you ask her what she got the FIRST thing she tells ya is she got a cupcake maker-a REAL cupcake maker! And it DECORATES them too. ;) The other "big event" for her birthday was getting to go to build a bear and make her build a bear. She picked a cute Lamb that she named Lucy the Lamby. TOO CUTE! She now has a couple build a bears. She also got one from her aunt and uncle that is a pink monkey named Spunky The Monkey...hmmmm I like the name! *wink*

Her party was lots of fun. Grandma and Crappa had a SUPER fun game to play called Duck, Duck, EMILY! As you can imagine-it was hilarious! Aunt Janece and Uncle Jeremy brought their classic win loose or draw with all the things being about Emily in one way or another. Aunt JoJo and Uncle Levi did a balloon game that was nothing short of HILARIOUS! So thanks to everyone Emily had a very memorable 5th birthday party! 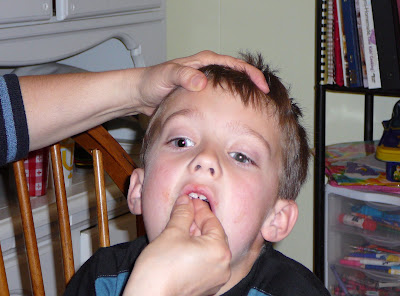 Kaleb has not had the best luck with loosing his baby teeth. They just DON’T want to come out! The last few times we’ve gone to the Dentist he has warned Kaleb that if he didn’t start wiggling his teeth and loosing them he was going to have to start pulling some. His permanent teeth were coming in-but not pushing the baby ones out. He had a “crocodile” mouth. LOL! 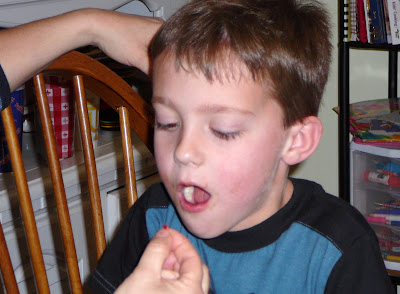 Well, the night before his next dental appointment that was going to decide if extractions were necessary he got desperate. He enlisted Grandma to help him get out ONE of FOUR teeth he needed out. It was the only one that was even SEMI loose! Poor kid has NO thresh hold for pain! Grandma got the job done…only too bad for Kaleb the other 3 had to be extracted…ON HIS 8TH BIRTHDAY! *that story and info in another post to come later* 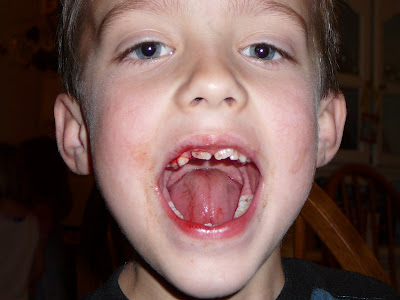 OK, so I DON’T have any photos for this story BUT, it’s hilarious! One night I needed to go to the store and my friend wanted a night out. So I picked her up and we had a much needed chatting session while I shopped at Kroger! LOL! And I must say we had a pretty good time…so did all the other shoppers. *wink* After shopping I drove her home and we sat in my van and talked for a bit.

I parked my van in the front of her house RIGHT under a street light. I didn’t turn it off though because I hadn’t planned on being there long, I had groceries in my car. After a little bit we saw two people walking with their dog. Turns out it was the Sheriff that lives at the end of her road. After they passed us a second time I though something might be up. And during all that my friend got a call on her phone she didn’t recognize-and didn’t listen to the voicemail right away.

Just as my friend is getting out of my van to go in her house TWO police cruisers pull up behind my van! My heart is RACING! She had her door open and was stepping out when they called out “Get back in the vehicle!” I seriously thought I was on an episode of COPS! So one of the officers approaches the passenger side of my van and he asks us if anything is wrong. We say no that we were just talking….we explain that it’s her house…blah blah. Well the officer asks her if she has ID and can prove it’s her address.

She DID have her ID but She couldn’t PROVE it was her address because she still had her OLD address on her license! SO I hurried and called her husband on my cell phone to GET OUT there and vouch for us! He made it to the front porch and stood there and laughed….oh yeah-he LAUGHED! :) He only made it to the front porch because the local Sheriff recognized her and vouched for her to the officers. GOOD GRIEF! Well turns out, the neighbor across the street saw us pull up and after we didn’t leave for a while she was worried..CALLED her phone to let her know SOMEONE was parked outside her house. But she didn’t answer her phone OR check her voicemail. Because she didn’t answer she called the Sheriff up the road and he and his son took the dog on a walk.

On their second walk he recognized my friend, called the neighbor to tell her not to worry but it was too late. She had already called the police. The BEST part is that he husband had been sitting on their porch with a SHOTGUN on his lap for about 20 min watching us! WHAT was he going to do with that you ask?! WHO KNOWS! What kills me is that we were in a MINI VAN, parked under a street light, the windows DOWN and open, two women sitting in front and LAUGHING! And since the windows were open they even HEARD us laughing! And yet they STILL felt it necessary to call the police. Apparently we looked threatening! *my friend would consider that a compliment!* 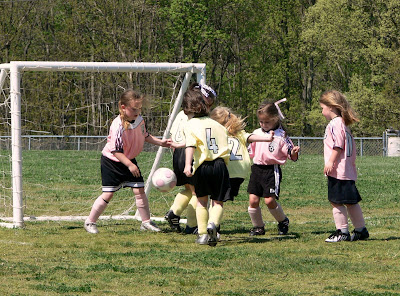 And with spring break came SOCCER!! Emily was so excited to start soccer back up. Her entire Honey Bee team returned from the Fall season. She loved her coaches and teammates so she was happy it was all the same. 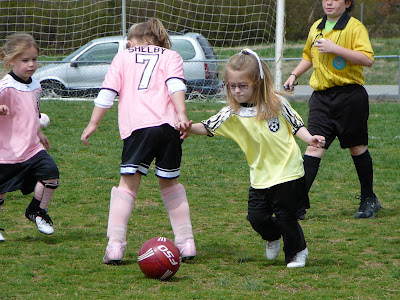 Kaleb’s team was quite different. There were only 3 returning players and the coach was different. They both played REALLY well though! 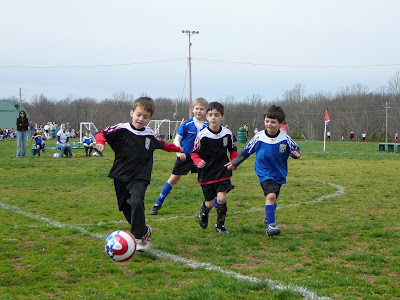 ...and that was our Spring Break! I’m sure there was more to share but since it’s taken me FOREVER to finish this post I can’t remember now! oh well :)