Apparently I forgot to put Kaleb's pumpkin find in here and sadly this is the clearest picture I have of it. But it's a good one *wink* He's such a ham! 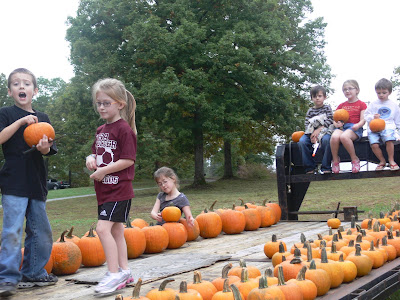 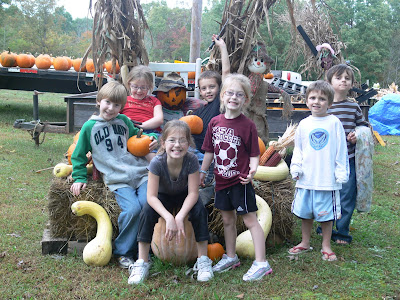 Yesterday we headed to Centerville to pick a pumpkin out. The place we went too was neat because they have trailers full of pumpkins with prices listed on the trailers and a mailbox with a lock on it, a slot in the front and note posted underneath, with a message that says purchasing the pumpkins is on the honor system. You pick your pumpkins out and then figure out how much you owe and put it in the mailbox slot. In today's world, and today's economy you would think people using the honor system in regards to money would be laughable. I however was glad to see that people still have faith in others to be honest and do the right thing. 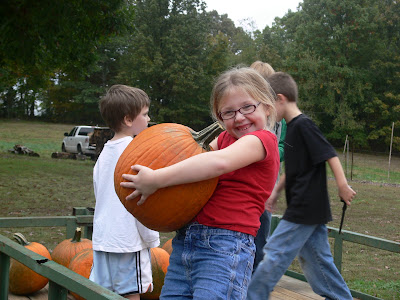 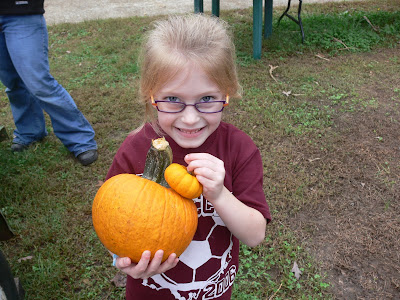 Emily found a cute pumpkin and baby one to go with it. Sadly she had to choose only one. She picked the bigger of the two. lol! 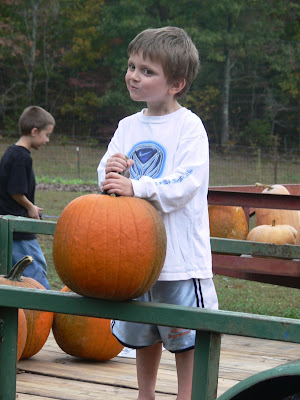 We went with our good friends the Taylor's. It's their tradition to come here each year to pick a pumpkin out. Thanks guys for sharing this tradition with us! We had a blast, as always! Isaac was hamming it up for the camera when I asked him to smile. Too cute! 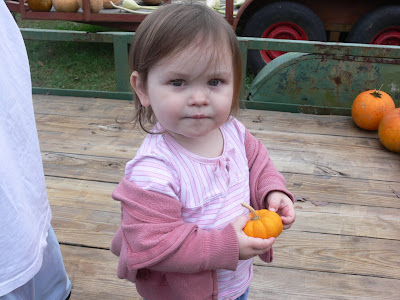 Liah with a little pumpkin...this is not the pumpkin she ended up with, but it was super cute!
Christopher took the longest to find his pumpkin. It had to be perfect. He was fun to watch. 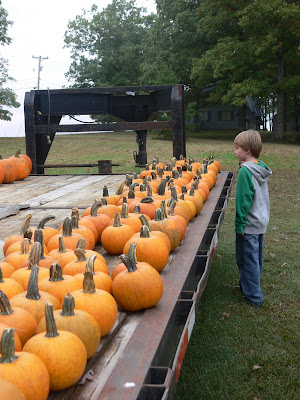 Wow...that's a lot of pumpkins to choose from... 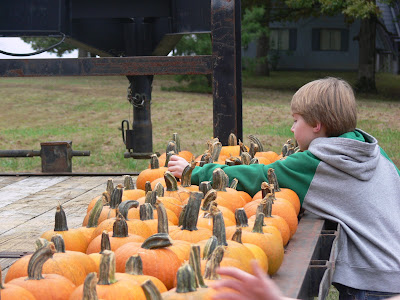 how about this one... 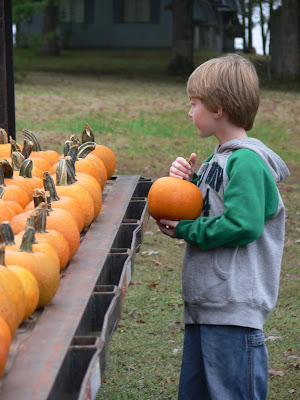 feels good...but is it perfect? 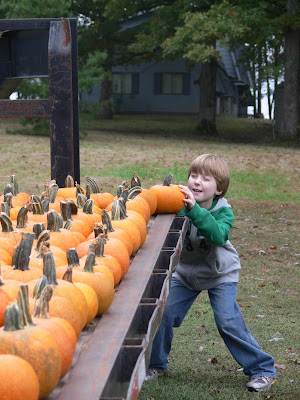 it's so hard to see if it's perfect? 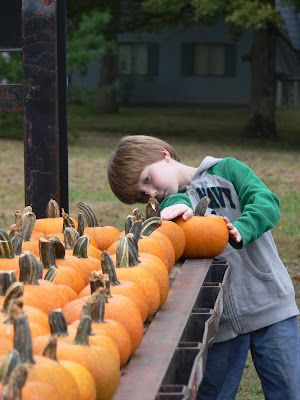 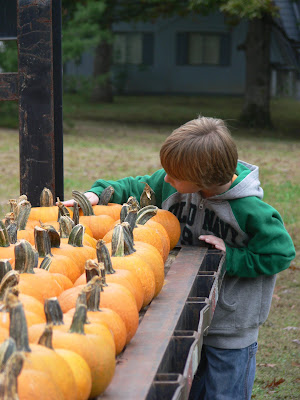 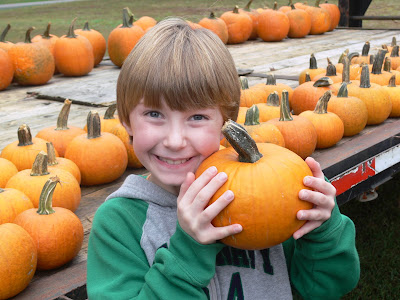 Finally! FOUND IT! And it IS perfect. *wink* 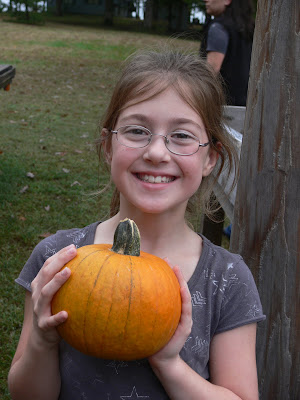 Kayleah found her perfect pumpkin. She tried out several before she settled on this one. 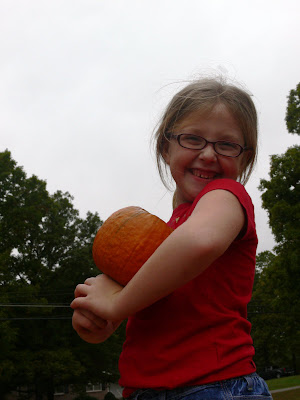 Yes, that is Sarah's pumpkin. And yes, she has turned it into a bridal bouquet. Only Sarah would turn a pumpkin upside down and march up and down the trailers humming the wedding march! *Cute story alert!* In the car on the way home Sarah and Gabriel were sitting in the back seat in Jenn's van. Sarah was apparently tired at one point and laid her head down in Gabriel's lap. Shortly after Gabriel leaned over and kissed her cheek. Now, we've had to have a couple "discussions" with our kids and lovin' each other so much...it's cute, but ya know what I'm talkin' about. Anywho!- Jenn saw this and said "Gabriel..." to which he replied "What mom? I know we can't kiss on the lips until we're married but I'm just kissing her on the cheek" ... Jenn said "I know but you don't need to be kissin' anybody till you're married, so no more kissing" A few minutes later Gabriel leaned over and whispered to Sarah "I'm gonna marry you so I can kiss you." How cute is THAT?! Pretty stinkin' cute I think. *wink* 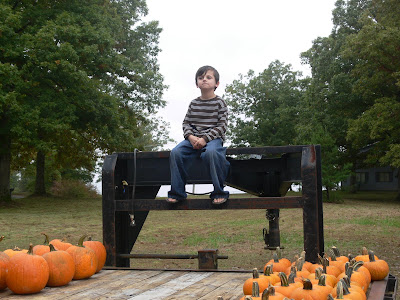 Gabriel found a pumpkin but I didn't get a picture before he put it in the car. Here, he climbed up on the trailer, sat down and said, "here I am, King Gabriel" and he sat. on his throne. LOL! 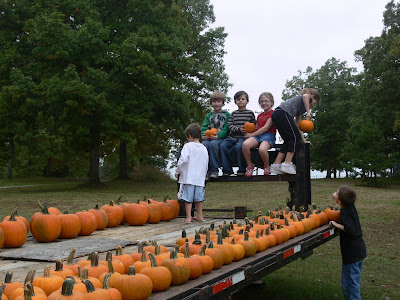 All the kids had a ball picking out their pumpkins and then later showing them off to EVERYONE they came in contact with. The day was perfect, the weather cooperated and we couldn't have asked for better company. Ahhh, fall.

Well, my Dad closed the pool today...sniff sniff. That's right, no more swimming at Grandma's and Crapa's house. We deffinitly haven't been swimming as much as we did when we lived there, EVERYDAY! But it's still sad to see that it's closing solidifies the end of summer.
So in honor of the pool closing I found this photo. I know I have TONS more and SO MANY blogs that I need to post...I'm trying I promise! Let me preface this photo, I was sitting across the pool from Emily when I looked up to see her sitting there in GLOVES with a towel over her lap, a hat on lookin' at a book. I started laughing immediately!! I was trying to decide if I was looking at my 5 year old or a flash forward to Emily as a 50 year old *wink* I love how the buttons in the cushions and her hair make it look like she's wearing big dangling earrings!
*lots more swimming photos coming...soon* 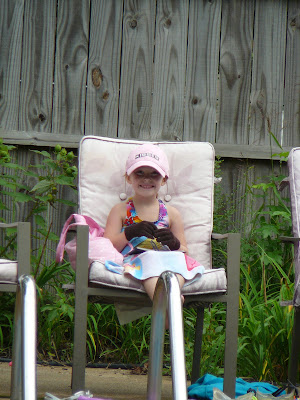