Yesterday Christopher had a MOST terrible day! Those are his words. Bless his heart! The really sad part is that what made his most terrible day terrible, all happened in about 2 hours time.

First, I met the kids at the bus stop and drove them to the beginning of our neighborhood where there's a car wash. They love going through the car wash. Really, who doesn't?! -wink Well, when we go through the car wash we crank up the music and have a little party in the van. It's a lot of fun! This time Kaleb had me in stitches right off.

As soon as we pulled forward a VERY R&B song came on and Kaleb jumped up out of his seat to the middle of the van close to the front and started dancing. REALLY dancing! The kid's got natural talent! OK, I got a little side tracked, but my reason for starting there was poor Topher kept trying to tell me something that was very important to him but it just wasn't going to work in that moment. He told me he would tell me after the car wash, he just wanted to enjoy that first. He really talks this way, isn't it adorable?!

So, on the way home he tells me the bad news. For the bus ride home and here after, the bus would be divided. Girls on one side, boys on the other. This doesn't sound like a bad idea to me -especially since they ride the bus with kids in ALL grades. Well, to Christopher it's horrible news! One of his best friends that rides the bus with him to school and also goes to church with us is a GIRL! Now he can't sit with her on the bus. Poor guy was pretty broken up about it. 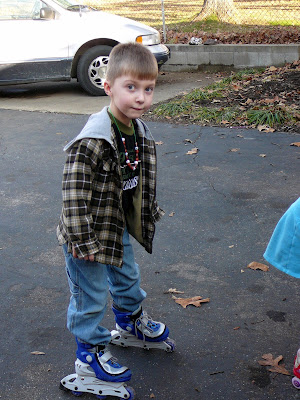 how often he gets to see her and that the 5 mins he's on the bus with her isn't very long. After a few mins he agreed it wasn't the end of the world and put on his roller blades. He had a great time for a while until the second terrible thing happened. He crashed, not for the first time that day mind you, and then Kaleb ROLLED OVER his HAND!

Christopher has a pretty high pain tolerance where PHYSICAL pain is concerned. Emotional...well, not so much. So when he started crying I jumped up right away. He told me he didn't think they were broken but that they hurt REALLY REALLY bad! I looked them over and decided he was right, they weren't broken. I sat him down on our brick flower bed wall with a bag of ice.

He sat there for several mins by himself. After a bit Kayleah went and sat with him. Then the third terrible and I mean TERRIBLE thing happened to him. He felt a BIG drop of WARM rain...but the rain was BROWN and WHITE. Kayleah being the sweet sister that she is, tried to help him wipe it off. I saw her wiping down his arm and went to help...and...yep. That's right!

She wasn't wiping off a big warm RAIN drop. She was wiping off BIRD POOP! GRROOSSS! Well I sent her in to wash her hands and took Topher straight to the SHOWER! Poor kid had it on his head AND shoulder. Standing in the bathtub waiting for the water to get warm he said, Mom-this has been the MOST TERRIBLE DAY! First, the bus driver made me not be able to sit with Cindy on the bus, then Kaleb hurt my fingers and THEN a bird POOPED on me!

I laughed sympathetically and agreed with him. I told him for a kid his age all those things would make for a pretty bad day. BUT he did have a pretty great story to tell his friends! At that he started laughing and I started laughing and just like THAT-his day was good again.
Spat Out by Hannah at 9:47 PM 6 comments: