The kids get two weeks for spring break, they are on a semi-year round school schedule. They get exactly two months off for summer break and then have a 9 weeks on 2 weeks off schedule for the rest of the year. Grandma, my mom, who works for a different school district only gets one week. So for the first day of Granma’s spring break, 2nd week for the kids, Grandma and Crappa took everybody to the Nashville Science Center! It was SO FUN! No, it wasn’t COSI…sniff sniff *wink* BUT it was super dang fun! The kids had a ball going through everything. One of the highlights was being able to MOON WALK. After exhausting ourselves at the Science center we went out for Pizza at Pizza Hut. YUMMY! The kids had so much fun and wore themselves out so much that on the drive home Emily fell asleep in a pretty funny position. THANKS Grandma and Crappa for the super fun day and yearly pass to the Science Center!

The next day, after the Science Center, we had some other friends over…the kids were jumping on the trampoline and…

First Emily got bounced on. The kids were all bouncing and one of our friends who is just a bit older than the triplets and sturdier, accidentally jumped on Emily’s leg when she was sitting. She came inside and laid on the couch with an ice bag. THEN about 10 mins later Sarah bounced out of the trampoline where the screen enclosure zips open and closed, onto the cement patio! She hit her head, her butt and her arm. What a shock to the system! I ended up taking them both in JUST to be safe. They were both fine, no broken bones or concussions-PHEW!

On our way to soccer Friday night there was an “incident”. The kids were loading up in the van and I was grabbing last min supplies or SOMETHING before heading out for an hour to practice. Next thing I know Sarah comes running inside saying that Kayleah was hurt. I asked her how, what happened…etc. I ran outside and found Kayleah pacing back and forth in the van holding her head crying. I won’t lie, I was pretty dang scared! First of all, she looked shocked, confused and was obviously in a lot of pain. I could see some blood on her head and the side of her face. She also had a little on her hand. When I stopped her pacing in the van and helped her out she fell into my arms and started sobbing.

Now I was REALLY worried! At that point I started looking her over a bit frantically to see where the blood was coming from and how serious her injury was. Kaleb saw the blood on her face and started to freak-I did my best to calm him down before he said anything to tip Kayleah off but I failed. She heard the word blood and started panicking all over again.

I got her inside quickly and cleaned her up…and then I found out what had REALLY happened. Turns out all the kids were getting in the van and Sarah was waiting for everyone to be in and then close the sliding door. Well, she thought everyone was in and JUST as she slammed the door (and BELIEVE me, she does this with GUSTO so there was real POWER behind her) Kayleah tried to slip in just at that same moment…and…got caught between the van door and the VAN. Her poor ear got clipped! These pictures were actually taken two days AFTER it happened! 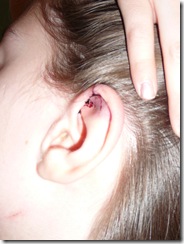 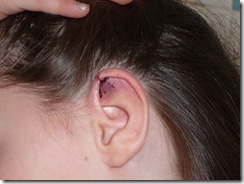 I had it bandaged up from the get go—pictures just weren’t as important as her beautiful ear healing. She was SOOOO worried that her ear would look deformed. She just wanted to know that it would look “normal” when it healed. I called the doctor to make sure I didn’t need to bring her in for stitches and then I used that fabulous handy dandy liquid band-aid stuff and voila! Looks good as new now!

Sarah was so sweet. She felt so bad, it truly was an accident. Kayleah didn’t rake her over the coals about it either, which isn’t really her style-wink wink and a nod. They still love each other!