Kaleb thinks he's SO funny!...and sometimes he IS!

I know I've said before that Kaleb is quite the talk-a-tive type at the dinner table and tonight he did not disappoint!  Earlier today I got a phone call from 20/20 research here in TN.  Occasionally they call me to answer surveys, get my opinion on stuff...blah blah and I can get paid for it sometimes too.  Always a bonus *wink* WELL...this time when they called they wanted one of the kids.  At first they needed Kayleah but then they didn't get her in the system fast enough so then they called and said they needed one of the boys.  So Kaleb is doing his VERY first research study.  And YES, he gets paid for it.

So back to dinner, Kayleah is a little sad she doesn't get to do it.  She was talking to Kaleb about it and asked if he got paid for it.  He didn't know so he asked me and I said yes.  BUT! While I was saying BUT...he was busy hooting and hollering about getting paid...finally he stopped to hear my BUT...I already know how you're going to spend it.  I know I'm so mean.  Not really!  I told him we're going to spend it on something REALLY fun...for EVERYONE!

So then they wanted to guess what it was for.  No, I'm not telling them...or you for that matter.  Not yet *wink* But their guesses where HILARIOUS!  The best one was Kaleb...GOODWILL! That is SERIOUSLY what he guessed.  I started laughing OUT LOUD!  All the kids were laughing and I just kept looking at him like "what?!" and laughing.  So then he explains himself.  He said, "What?! You and Miss Jennifer spend HOURS in Goodwill and you don't buy ANYTHING! You made us stay there once for 2 hours and then when it was all over and we finally got to leave you didn't even BUY anything?!" LOL 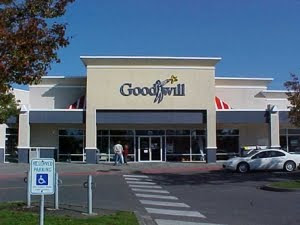 I'm ROLLING by now at this, because for one he's RIGHT! We DID make them spend 2 hours there once and walked out with nothing. BUT we weren't there to buy anything.  We were there scouting out the goods for the next days shopping on .99 cent day! LOL
Spat Out by Hannah at 8:37 PM 3 comments: