The second day we were there Jenn rented a wave runner! SUPER FUN!  None of us had ever been on them before.  So, on her debut drive Jenn took her boys, Gabriel and Isaac out for a ride.  They came back SO EXCITED about it!  They kept telling the other kids they were just going to LOVE it so much! 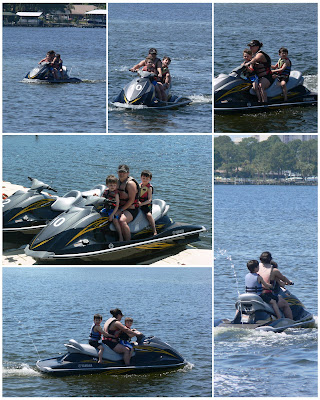 Sarah and Emily were next.  Sarah apparently had a hard time keeping ahold of Jenn during the ride. 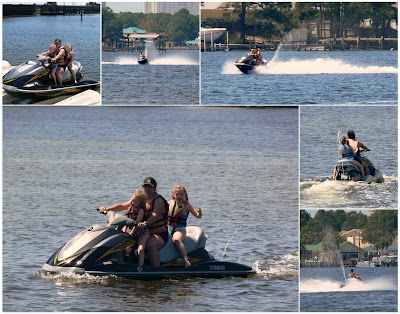 Kayleah and Christopher went next.  They got splashed in the face with the wave runner *wink*. 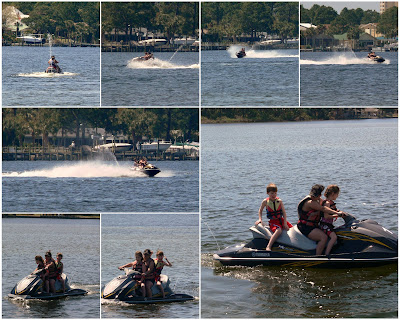 Kaleb was last, or so we thought...ahem.  He got to go the fastest with Ms. Jennifer and he was SO excited about that! LOL! 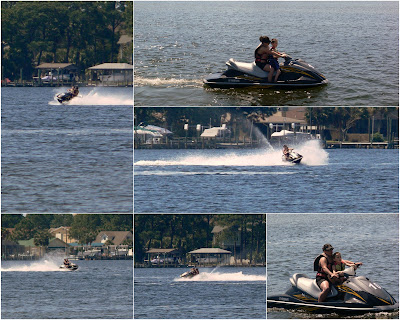 After Kaleb went little Liah started saying she wanted to go with mommy on the boat.  So we thought "why not?!" She then floored us even MORE  when the guy who was helping the kids on and off the boat docks reached out for her AND SHE WENT TO HIM?!! With NO qualms!!  She let him help her get the life jacket on and put her on the wave runner with Jenn.  The whole time I'm thinking as soon as Jenn gets on the water and turns that motor up she's going to freak out and scream for me to get her off...NOPE!  She starts waving "bye Hannah!" and apparently had a BLAST with Jenn on it!  I really should have Jenn write up this part of the vacation because she's the one who took the kids out.  I actually didn't go out on the wave runner.  And NO it wasn't because I was chicken-SERIOUSLY people!  We ran out of time...sniff sniff.  But next time...OH YEAH! *wink* 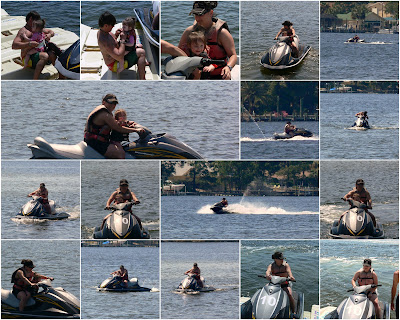 We had guests come into the marina while everyone was wave running...DOLPHINS! It was really neat to see them!  Later I was telling Jenn about it and she said she thought she saw some "big fish" underneath her while they were out on the runners.  She's even pretty sure she hit one a time or two....AHHH so sad!   Again, I'm really going to have to have Jenn write up about the wave running trip.  The kids loved it!  You could tell her confidence was growing with every run with the kids because she got faster and more crazy *wink* lol they had a blast!

After we went wave running we went to the one, the ONLY...PINEAPPLE WILLY'S!! Did we get a picture? No.  Why you ask?  I have NO IDEA?!  But we did get the kids all shirts that I'll have to get a picture of them all in them and put that on here.  It was cool.  And good food! 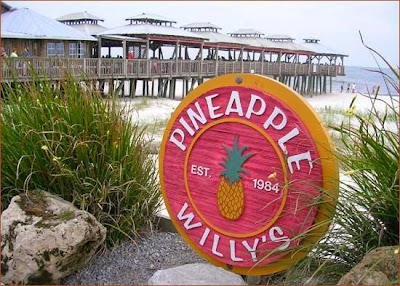 Finally we went "home" and hit the beach.  It was a perfect end to the day.  We played in the sand, found sea shells and Jelly Fish.  Seriously there were Jelly Fish EVERYWHERE  there on Sunday...but I'm talking about Friday.  Ok, we saw a HUGE one that went right by Kayleah, Jenn, Liah and me.  I tried to catch it in a bucket but we couldn't get it fast enough.  Out of nowhere this kid comes up, scoops it up, dumps it on the beach and CHOPS it in HALF!  Then he scoops the rest of it up in a bucket and takes it off to bury it.  We would have LOVED to have let the kids look at all the cool parts of the Jelly Fish.  Especially since it was a mature Jelly fish!  GRRRR.  Oh well, later I found a little one, scooped it up and we showed the kids that one.  AND we shared with people around us.  So THERE mean selfish kid on beach! TBS!! I feel better now. 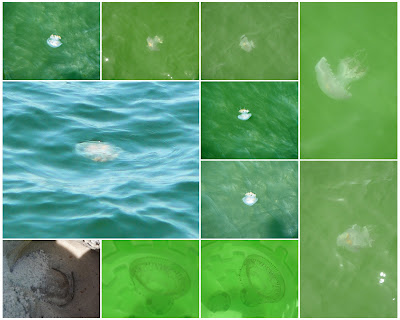 The three bottom left pictures are of the little Jelly fish we caught and "played" with...then buried.  Because that's what you gotta do when you find one.  Otherwise it might sting someone.  :-(   The other pictures were taken either from the balcony of our condo or off the pier.  Pretty cool huh?

In another post, I'll put up the sunset pictures I took on this night.  They are BEAUTIFUL! *wink*
Spat Out by Hannah at 2:41 PM 3 comments: