What super power would you want?...

My kids are so funny!  They come up with the funniest and Funest *wink* games!  I know I have lots of other posts I've promised and they'll be coming SOON...I promise-REALLY.  But I was cleaning off the kitchen counter this morning from the last two weeks of build-up (the kids have been on fall break and today they went back to school *sad face* ) and I found THIS picture!  Now at first glance there are many things to love about it.  One it was drawn by Sarah.  LOVE her pictures!  Next, she used lots of FABulous colors!  And how smart was it of her to put rain drops under her beautiful rainbow right?!  But the BEST part of this picture to me is the title.  RAINDOM POWER  she was obviously trying to write RainboW power as evident by all her beautiful rainbow colors and lets face it-the rainbow she drew.  But when I first read it I read RANDOM power and started laughing hysterically! 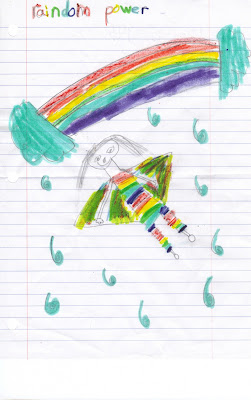 One of the games the kids came up with to keep themselves busy and out of trouble (believe me that was HARD for some of them...never have I handed out more timeouts for kicking balls in my house! And just so you know we were outside EVERYDAY so it's not like they were deprived from ball kicking!) ...so the game was making up super powers.  And then they would "battle" each other with their powers.  So one would call out a power against another and they would counter with a power they had come up with.  They didn't just make them up on the spot either.  They had brainstorming sessions at the kitchen table where they kept papers with the powers listed on them.  They even drew pictures of some of their powers and Kaleb drew pictures of everyone's super hero look!  They were great...but I can't find them!  He may have put them in his "special drawer" I'll have to ask his permission to get them when he gets home and show them off for you.  But Sarah had left this one on the kitchen counter and I have been laughing about it ALL morning.  So I decided if it can make me laugh and smile this much I HAVE to share it with all of you!  And now I ask the question: What super power would YOU pick?!
me: RANDOM POWER! Seriously, whenever I randomly need power-BAM! *wink* LOL!
Spat Out by Hannah at 10:37 AM 3 comments: